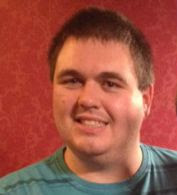 It's been a while since the last Vox Ludio (nearly 2 1/2 years, in fact), but what better way to get back into the swing of it than by interviewing long-time Apterous favourite and gameshow legend James Robinson? The Mirfield maestro shares his thoughts here...


Hi James, how’s your day been?
Hey Jen, it's not been a bad day today. It's a nice day off, as I've just been celebrating my 28th birthday, I never work on my birthdays, as where's the fun in that??

Of course, the first question in any interview with you has to be: how are ‘the Terriers’ [Huddersfield Town FC] doing at the moment?

Well, as any Town fan will tell you, the first thing we want is to have an entertaining team who will get us great results. At the start of the season, that wasn't happening, but our brilliant chairman, Dean Hoyle (a lifelong Town fan), made probably the biggest gamble in the club's history by hiring the (unknown in this country) German-American David Wagner.

And what a move that was!! His "Gegenpressing" ethos has made Town a much fitter team, a much stronger team, and a team to be feared. The amount of times that fans from other teams have compared us to Barcelona this season is unreal!!!

And while we might not quite get all the results together yet, it's a very promising future we have with our youngsters mixing in with some shrewd signings. Philip Billing (our young Danish holding midfielder, who scored a cracker against Forest last weekend) is a name to look out for in the coming months/years.

You’re famous for your boundless enthusiasm for all things Countdown, be it recaps, Co events or being in the studios. What is it about Countdown that you love so much?

I remember first watching the show at 3 years old, at first I liked the music and title sequence (this one, in particular) I remember getting my first word when I was about 6/7 (SLEDGE, it was), getting my first conundrum at about 8 (had to be CHOCOLATE

) and my first 9 at about 11 (DECANTING, which I spotted after about a second or so).

In the early days, of course, it was set in Leeds, and living just 10 miles away in Mirfield, I felt a sense of local pride and I even dreamt of being in the audience - but being young at the time, I didn't realised it was pre-taped, and thought it was live!!

I think the thing I love about it most is that it's a simple concept. "Here are some letters, make a word out of them; here are some numbers, use maths to solve the problem; here's an anagram, unscramble it."

When I watched the show as I was going into my teens, I thought I was getting better, my maths was always decent, but I thought my vocabulary was OK (that was until Julian Fell in 2002, then Apterous, after I went on the second time, came along... and since attending my first CO-event in 2010, it's amazing to see how people with so much dedication can get so knowledgeable).

With FOCAL tournaments lined up in St Albans and Huddersfield this year, you’ve got plenty to work on behind the scenes. Describe your ultimate Co event, if money were no object!

If I could have an ultimate CO-event, first, I'd get the current Countdown studio, as we definitely need that, especially with the big clock. I would get Rachel as we need her for my benefit.

I'd get Tim Vine in to be our day-long DC guest, cos he was just amazing when I had him as a guest back in 2009. He'd keep us entertained all day, especially once my jokes dry up!!

I'd also bring back all the legends, who we haven't seen/heard of for ages, e.g. Julian Fell, Harvey Freeman, Allan Saldanha, Scott Mearns, etc., so we could have a super awesome tournament. And since the Pointless game worked well at COHUD last time, maybe bring half the Pointless studio in as well for a bit of mid-game fun, along with Richard Osman, as he's super necessary to make it a proper Pointless show.

You’ve been on plenty of gameshows besides Countdown - Eggheads, Mastermind and Pointless to name a few. What’s been your favourite gameshow experience? Are you planning to apply for any others?

I would say Eggheads is my favourite, because normally when I go on other game shows, I go on by myself. I feel that like on Countdown, not relying on others makes it easy on yourself, as you know your own strengths and weaknesses, but not your team-mates, but the fact that my team became only the 10th team EVER to take the Eggheads down to one for the final is just something remarkable. I would've been happy just for it to be 3-3, but the fact that pretty much everything went our way (up until the last bit) was just unbelievable. It'll certainly take some beating!!!

I have applied for other shows now (I had to wait until Eggheads was on until I could apply for others), but I now am having an audition for Only Connect, and I do hope that I can finally get on The Chase real soon, and hopefully take on Paul "The Sinnerman" Sinha, as he has a great love of Countdown, like us lot.

As a born and bred Yorkshireman, what are some of your favourite things about Yorkshire? (Presumably not Elland Road!)

Hehe, I might be a born and bred Yorkshireman, although thanks to my parents both being from the Midlands, I don't have the accent.

But Yorkshire as a whole is just a place of beautiful diversity and contrasts. You have the multi-cultural diversity of the different faiths in the west, the beautiful scenery of the coast in the east and the amazing hillside peaks in the north, and the industrial south, which gives a perfect mix of urban and rural. Also a good bit of Yorkshire Tea can't go a miss either.

You’re a big fan of James Bond. Which Bond do you identify with most, and why?

My favourite Bond is the one I certainly most identify myself with, Roger Moore. He was very English, quite liked to be a bit posh, and while I'm not quite that, I do like the idea of being it myself. He never took himself seriously in the role, but he had that debonair attitude, which made the role his own. He might not be as rough and action-hardened as Sean Connery and Daniel Craig, but if he did that, it wouldn't be believable, as they tried to do to him when they did The Man With The Golden Gun.

Finally, as a prolific user of emojis - what’s your favourite emoticon?

Hehe, I must say I do blame c4c for my love of emojis, without those emojis on the side when you make posts, I might not have ever used them!! I think my favourite sums up what I like about life, being COOL, so it's this one:

Thanks James! We'll be back next month with some insight into the mind of Street superstar and irrepressible tournament organiser Marcus Hares!
Posted by starkravinglefty at 11:51